The fifty-eighth meeting of the Presiding Officers of the Regional Conference on Women in Latin America and the Caribbean was inaugurated this Tuesday in Santiago, Chile.
22 January 2019 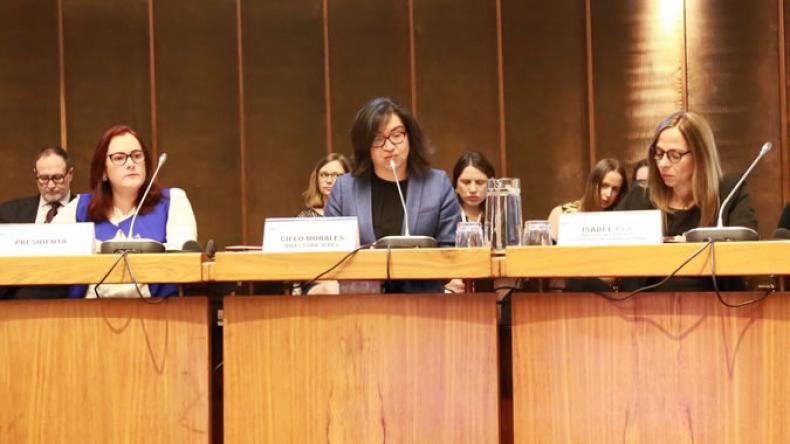 Ministers for women’s affairs and senior authorities from mechanisms for women’s advancement in the region are discussing this Tuesday and Wednesday, January 22 and 23, in Santiago progress and obstacles to achieving women’s autonomy and gender equality ahead of the XIV Regional Conference on Women in Latin America and the Caribbean, a subsidiary body of the Economic Commission for Latin America and the Caribbean (ECLAC), which will take place on November 4-8 of this year in Chile.

The authorities are participating in the fifty-eighth meeting of the Presiding Officers of the Regional Conference on Women in Latin America and the Caribbean, inaugurated today by Isabel Plá, Chile’s Minister of Women and Gender Equity; Janet Camilo, the Dominican Republic’s Minister of Women and Vice President of the Presiding Officers; Cielo Morales, Chief of ECLAC’s Latin American and Caribbean Institute for Economic and Social Planning (ILPES), on behalf of Executive Secretary Alicia Bárcena; and Lara Blanco, Deputy Regional Director for the Americas and the Caribbean of the United Nations Entity for Gender Equality and the Empowerment of Women (UN Women).

During her remarks, Minister Isabel Plá reiterated the Chilean government’s commitment to the gender equity agenda, which includes measures to increase women’s own income as well as zero tolerance for violence against them. In that framework, she called on countries to participate in the XIV Regional Conference on Women that will be held in Chile in November, the main theme of which is precisely women’s autonomy in changing economic scenarios.

Meanwhile, Janet Camilo, the Minister of Women of the Dominican Republic, urged for “articulating, in the framework of the Conference, actions that can stop conservative advances that imply backsliding on the rights acquired by women in Latin America and the Caribbean.” For that reason, she said, it is important to analyze, in accordance with the Montevideo Strategy for Implementation of the Regional Gender Agenda within the Sustainable Development Framework by 2030, approved at the XIII conference held in Montevideo in 2016, “how our States, our countries, are doing in terms of strengthening the fight for equality through public policies” backed by concrete budgets.

In her remarks, ECLAC’s representative, Cielo Morales, warned that the low levels of growth seen in the region in the last few years “limit the opportunities for creating jobs for women and reducing poverty.”

“It is worrisome that the proportion of women living in poor households is systematically greater than the proportion of men,” the senior official sustained, indicating that the persistent sexual division of labor – which, among other things, leads to women being primarily responsible for domestic work and unpaid care – has negative repercussions for their incorporation into the labor market.

ECLAC data from 2017 indicates that women’s participation in paid work continues to be lower than that of men (50.2% and 74.4%, respectively) and that the level of female unemployment remains above that of males (10.4% versus 7.6%).

Although in recent years the number of women without their own income has declined, the female population is still overrepresented in the group garnering income below the minimum wage. According to figures from ECLAC’s report Social Panorama of Latin America 2018, 49% of employed women have work-related income that is below their country’s minimum wage.

Finally, Lara Blanco, of UN Women, addressed the support that the United Nations system provides to countries on promoting gender equality and welcomed the holding of the next Regional Conference, which she described as an “essential space for decision-making to be able to reach consensus and advance toward substantive equality.”

Video of the opening session (in Spanish). Photo gallery.