Home » Press centre » Calls Are Made to Overcome the Structural Constraints of Gender Inequality, Foster Women’s Autonomy in the Current Regional Economic Context, and Transform Privileges into Rights
Available in: EnglishEspañol

Calls Are Made to Overcome the Structural Constraints of Gender Inequality, Foster Women’s Autonomy in the Current Regional Economic Context, and Transform Privileges into Rights

Today was the inauguration in Chile of the XIV Regional Conference on Women in Latin America and the Caribbean, organized by ECLAC with support from UN Women and attended by senior authorities from the region as well as United Nations officials.
28 January 2020 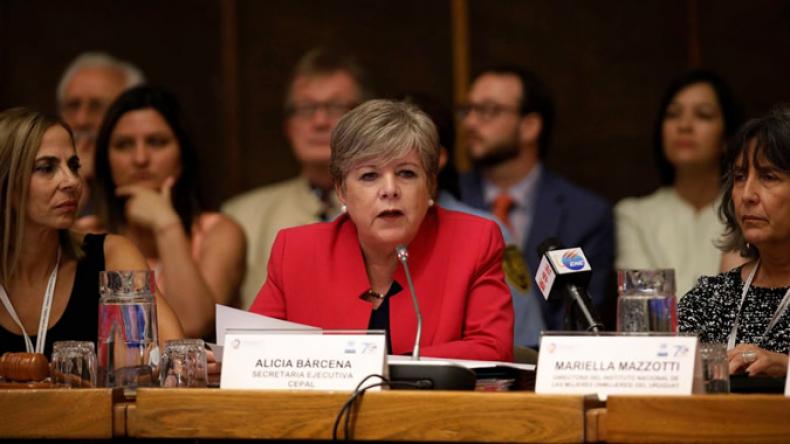 During today’s inauguration of the XIV Regional Conference on Women in Latin America and the Caribbean, authorities and international officials called for prioritizing policies for gender equality and women’s autonomy in the current regional context, characterized by economic deceleration – which debilitates the space for needed social, economic and environmental policies – and by a deterioration in poverty and inequality indices.

The gathering – organized by the Economic Commission for Latin America and the Caribbean (ECLAC) with support from the United Nations Entity for Gender Equality and the Empowerment of Women (UN Women) – is being held through January 31 in Santiago. Its main theme is precisely that of women’s autonomy in changing economic scenarios.

In addition to thanking the Chilean government for hosting the XIV Regional Conference and for the preparatory work done in conjunction with UN Women, Alicia Bárcena, ECLAC’s Executive Secretary, said that “today more than ever, clarity and resolve are needed to overcome the constraints of inequality and confront the new challenges imposed by geopolitical, economic, technological, demographic and climatic changes.”

“Gender inequalities continue to be a structural trait of the region and their determining factors lie in macroeconomic, productive, institutional and sociocultural spheres. Growth drivers and levels in the region have not been sufficient to create favorable conditions for achieving greater economic autonomy among women and overcoming gender gaps in the labor market,” she stated, adding that this process is about transforming privileges into rights.

Despite progress, women’s labor participation rate in Latin America has stagnated at around 50% (while that of men is 74.4%), meaning that half of all women in the region have no tie to the labor market, she indicated.

At the conference’s opening session, the Minister of Women’s Affairs and Gender Equity of Chile, Isabel Plá, said: “It is an honor and enormous challenge to be the hosts of the XIV Regional Conference on Women in Latin America and the Caribbean, and it is a great opportunity for Chile to receive representatives of the region’s countries in order to share our experiences and strengthen our efforts to promote women’s autonomy and empowerment in the changing economic scenarios that we face at a regional level.”

Also representing the Chilean government, Carolina Valdivia, Undersecretary of Foreign Affairs, indicated that “the theme of the XIV Regional Conference, women’s autonomy in changing economic scenarios, puts us face to face with a reality that, far from being fictional, is a major challenge lying ahead. Vulnerability to economic cycles, migratory flows, the digital revolution, climate change, demographic changes – these are all factors that hinder overcoming discrimination and that mainly affect women and girls.”

Meanwhile, Mariella Mazzotti, Director of the National Women's Institute (INMUJERES) of Uruguay, said “it is important that the regional gender agenda be re-nourished, that it take on new challenges and be enriched by each country’s experiences and the reflections coming from academic research, and contributions, particularly from ECLAC.” She also noted that “the Montevideo Strategy that we approved in 2016 is an instrument that recognizes inequality as a structural problem in our countries.”

Åsa Regnér, Deputy Executive Director of UN Women, warned that “if we continue at this pace, it will take us 200 years to eliminate the gender gap.” For that reason, she called on Latin American and Caribbean countries, some of which are rich in natural resources, to create taxation systems or other mechanisms to earmark funds for gender equality policies. “There is no time to lose” ahead of 2030, the deadline for fulfilling the Sustainable Development Goals (SDGs), she said.

Finally, Silvia Rucks, Resident Coordinator of the United Nations system in Chile, stressed that the country “has made progress on programs and policies to narrow the wage gap, and work on that must continue. But we must also look at inequalities among women. And here the data is revealing: women in the first decile, meaning those with the lowest income, earn 13 times less than women in the highest-income decile. A similar scenario is seen for labor participation.”

During her remarks, Alicia Bárcena addressed the main challenges related to the three dimensions of women’s autonomy in the region: economic, physical and autonomy in decision-making.

The wage gap in the region, she said, continues to be pronounced and, paradoxically, it is accentuated among women with more years of schooling.

And, while countries have made progress on adopting regulatory frameworks to prevent, sanction and eradicate gender violence, there are neither the resources nor the institutional structure needed to ensure their effective application. As of 2018, at least 3,800 women had been the victims of femicide in Latin America and the Caribbean.

Furthermore, although women’s political participation in national parliaments has shown a sustained increase in recent decades, women only occupy an average of 31% of seats in the region.

“At ECLAC, we sustain that equality is the ethical value that must guide development strategies. When we talk about gender equality, we are referring to equality in access to power, to resources and in the use of time. And women’s autonomy is indispensable to achieving equality,” Bárcena concluded.

Participating in the gathering in Santiago are representatives of government, civil society organizations, the academic sector, intergovernmental agencies, and the United Nations system.

Members of the media are invited to cover this Regional Conference, which is being held at ECLAC’s headquarters (Av. Dag Hammarskjöld 3477, Vitacura, Santiago, Chile). Journalists must have their media credentials or identity documents with them to gain access to the building, and they must get accredited ahead of time using this form.