Home » Press centre » Chile Will Host the Main Intergovernmental Forum on Women’s Rights and Gender Equality in the Region
Available in: EnglishEspañol

The XIV Regional Conference on Women in Latin America and the Caribbean, organized by ECLAC with support from UN Women, will take place on November 4-8 in Santiago.
6 September 2019 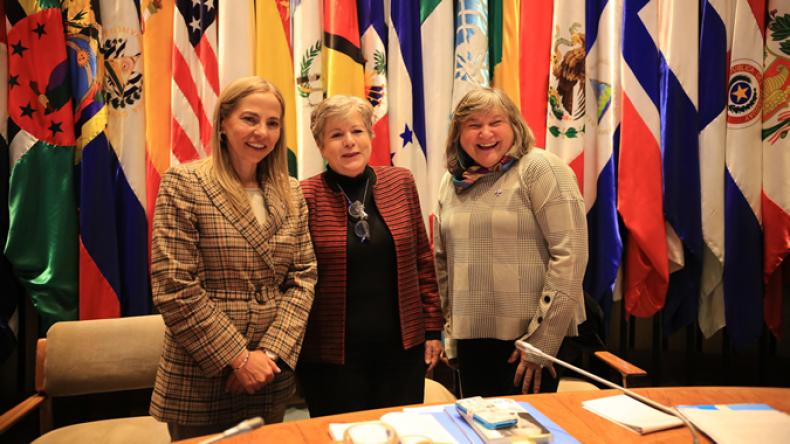 From left to right: Isabel Plá, the Minister of Women and Gender Equity of Chile; Alicia Bárcena, ECLAC’s Executive Secretary; María Noel Vaeza, Regional Director for the Americas and the Caribbean of UN Women.

Women’s autonomy in changing economic scenarios will be the main theme of the XIV Regional Conference on Women in Latin America and the Caribbean, which will be held on November 4-8 at the headquarters of the Economic Commission for Latin America and the Caribbean (ECLAC) in Santiago, Chile, authorities and senior officials from the United Nations (UN) announced this Friday, September 6.

The Regional Conference on Women in Latin America and the Caribbean is the main intergovernmental forum on women’s rights and gender equality in the region, the officials holding a press conference today indicated. They included Isabel Plá, the Minister of Women and Gender Equity of Chile; Alicia Bárcena, ECLAC’s Executive Secretary; María Noel Vaeza, Regional Director for the Americas and the Caribbean of UN Women; and Mariella Mazzotti, Director of the National Women's Institute (INMUJERES) of Uruguay in her role as President of the Presiding Officers of the Regional Conference (via videoconference).

This event, which is held every three years, is organized by ECLAC, as the Secretariat of the Conference, with support from the United Nations Entity for Gender Equality and the Empowerment of Women (UN Women). Participants include representatives of governments, civil society organizations and the United Nations System.

“On behalf of the government of President Sebastián Piñera, I would like to express that it is an honor and enormous challenge for us to host the XIV Regional Conference on Women in Latin America and the Caribbean, and we feel very proud to be able to receive representatives of the region’s countries here in Santiago in November” to share progress, experiences and challenges in relation to the situation of women, Minister Isabel Plá stated.

“The digital revolution creates enormous opportunities for the millions of women who still do not have their own income,” said Plá, who highlighted the inclusion of the analysis of gender inequalities in other major international events that will be held in the coming months in Chile, particularly the 25th Conference of the Parties to the United Nations Framework Convention on Climate Change (COP25) and the APEC Leaders Summit (the Asia-Pacific Economic Cooperation Forum).

Meanwhile, Alicia Bárcena, ECLAC’s Executive Secretary, announced that in November the digital revolution will be analyzed, along with the way in which jobs for women are being segmented and the innovative sectors that can generate employment. Participants will also examine the care economy and its impact on the lives of women, along with female migration in the region.

“It is not enough to merely talk about gender equality. Equality has to be based on autonomy. Because if people do not have autonomy, they do not have freedom. We are referring to the physical, political and economic autonomy of women,” said Bárcena, who also indicated that high attendance is expected at the Regional Conference – which will be held for the second time in Chile (after 1997) – as seen at past sessions.

María Noel Vaeza, the Regional Director of UN Women, sustained that “the Regional Conference on Women in Latin America and the Caribbean will allow us to discuss the decisions and solutions for leaving behind economic stagnation in the region, because if women do not intervene in the economy, the region will not grow.” She also stressed that this conference “will be an example of how United Nations agencies can work together.”

Finally, Mariella Mazzotti of INMUJERES emphasized that the Regional Conference on Women – the XIII session of which took place in Uruguay in 2016 – “has played a substantive role in the joint work of the region’s countries, with regard to mutual learning and also the drafting of recommendations.” She added that “the XIV Regional Conference will be crucial because it will touch on perspectives regarding the current context but also the medium term, on what our countries must tackle in order to move toward sustainable development with equality.”

The Regional Conference on Women in Latin America and the Caribbean is convened to identify the situation of women’s autonomy and rights at the regional and subregional levels, present public policy recommendations for gender equality, and undertake periodic assessments of the activities carried out in fulfillment of regional and international agreements.

At the gathering in Santiago, there will be a regional commemoration of the twenty-fifth anniversary of the Beijing Declaration and Platform for Action (Beijing+25), and a high-level panel will be held to evaluate progress on the application of the Montevideo Strategy for Implementation of the Regional Gender Agenda within the Sustainable Development Framework by 2030, adopted in 2016.

Complete video of the press conference (Spanish only). Photo gallery.