Latin American and Caribbean Countries Approved the Santiago Commitment, Which Seeks to Accelerate Efforts to Fulfill the Regional Gender Agenda

The XIV Regional Conference on Women in Latin America and the Caribbean, organized by ECLAC with support from UN Women, concluded today in Chile.
30 January 2020 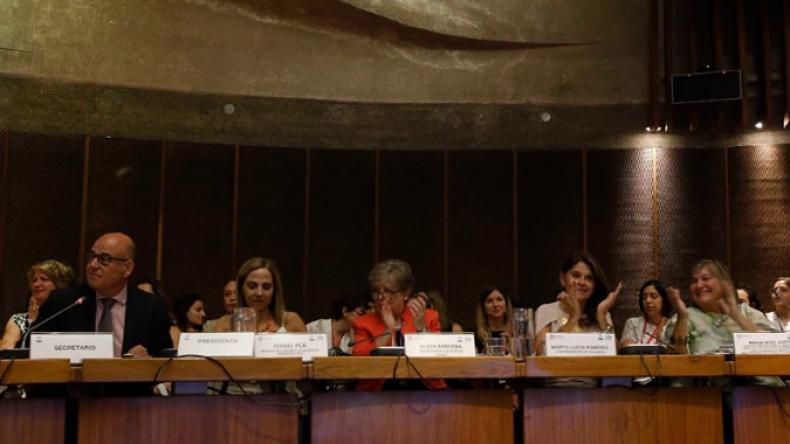 The region’s countries gathered at the XIV Regional Conference on Women in Latin America and the Caribbean approved the Santiago Commitment today, which establishes “taking all necessary measures to accelerate the effective implementation of the Beijing Platform for Action and the Regional Gender Agenda, strengthening gender institutions and architecture through the prioritization of machineries for the advancement of women and gender mainstreaming at the different levels of the State.”

According to the agreement, this will be achieved by “increasing the allocation of financial, technical and human resources according to national realities, capacities and legislation, gender-responsive budgeting, and monitoring and accountability, with a view to strengthening the implementation of equality policies in the framework of the 2030 Agenda for Sustainable Development.”

Among the Santiago Commitment’s 48 points, some that stand out include the agreements to eradicate gender violence; provide universal access to comprehensive health services, including sexual and reproductive health services; foster women’s labor participation in the areas of science, technology, engineering and mathematics; implement policies and programs, with a gender perspective, that contribute to a healthy and active aging process; reduce the wage gap; and increase women’s representation in decision-making processes with the goal of achieving a parity democracy.

Countries also committed themselves to “implementing gender-sensitive countercyclical policies, in order to mitigate the impact of economic crises and recessions on women’s lives, and promoting regulatory frameworks and policies to galvanize the economy in key sectors, including the care economy,” along with “integrating the gender perspective into national policies on climate change adaptation and mitigation, recognizing its differentiated effects on women, adolescents and girls.”

“The reality faced by our region today challenges and invites us to advance towards the end of inequalities with much more determination, because we are very clear about what we want: we want equality, that nothing be done about us, without us. We want a world without femicide, without violence, with equality in terms of wages and other economic matters,” Alicia Bárcena, the Executive Secretary of the Economic Commission for Latin America and the Caribbean (ECLAC), said during the conference’s closing session. “The time has come to change the gender scheme in our countries and put an end to patriarchy as a societal model. The time has come to pave the way for parity in all its forms and scenarios,” ECLAC’s most senior representative emphasized.

During her remarks, Isabel Plá, the Minister of Women’s Affairs and Gender Equity of Chile, said: “We have achieved significant progress with the Santiago Commitment, which represents a major step forward on the regional gender agenda with agreements that we hope will fuel change for the women of Latin America and the Caribbean, because without closing the social, economic and political gaps that still affect women, we will not be able to cross the threshold of sustainable development.” Plá took over the Presidency of the Conference’s Presiding Officers until the gathering’s next session in 2022 in Argentina, according to the agreement between countries.

María-Noel Vaeza, the Regional Director of UN Women for the Americas and the Caribbean, emphasized that “over the last three days, we have confirmed that important progress towards gender equality has been made in Latin America and the Caribbean. Yet there is still much to be done. We women cannot wait any longer. The Santiago Commitment, which is the outcome of this Conference, must be the roadmap that enables the region to recognize and fulfill the commitments that countries made to women and girls 25 years ago in Beijing, so as to move forward together on consolidating the Gender Agenda.”

The gathering, organized by ECLAC with support from the United Nations Entity for Gender Equality and the Empowerment of Women (UN Women), was attended by representatives of ECLAC’s 33 Member States and 6 associate members; 365 civil society organizations; 14 agencies, funds and programs from the United Nations system; and 11 intergovernmental organizations. Worth highlighting in particular was the participation of the Vice Presidents of Colombia, Costa Rica and El Salvador, as well as twenty-odd women’s affairs ministers and senior authorities from the mechanisms for women’s advancement in the region.