ECLAC presents the first regional progress report on the Montevideo Strategy for Implementation of the Regional Gender Agenda, in the framework of the XIV Regional Conference on Women being held in Santiago, Chile.
29 January 2020 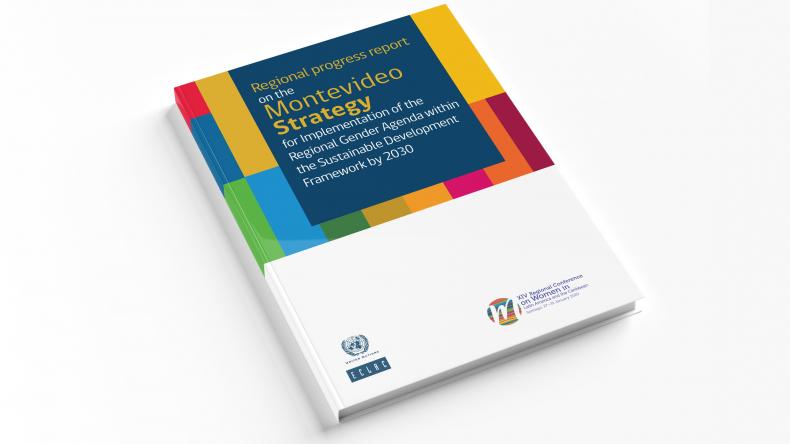 Forty years after the adoption of the Convention on the Elimination of All Forms of Discrimination against Women and the establishment of the Regional Gender Agenda, and 25 years since the approval of the Beijing Declaration and Platform for Action, it can be seen that progress on the path to gender equality is not linear. As a result of changes in economic, political and social scenarios, setbacks occur and new challenges emerge to achieving sustainable development based on gender equality, women’s autonomy and respect for their rights.

This is according to the first Regional progress report on the Montevideo Strategy for Implementation of the Regional Gender Agenda within the Sustainable Development Framework by 2030, released during the XIV Regional Conference on Women in Latin America and the Caribbean (January 27-31, 2020 in Santiago, Chile).

The document recognizes that implementation of the Montevideo Strategy’s measures is helping construct a solid institutional framework that mobilizes political will and ensures that actions for attaining gender equality become State policies. However, it also indicates that the first challenge faced in this process is the magnitude of gender inequalities in the region and the limited State capacities and resources available to address and reduce them in an adverse context.

For example, progress on building normative frameworks and institutional architecture to address gender discrimination and violence, while necessary, is not sufficient to end this violation of women’s human rights.

According to figures compiled by ECLAC’s Gender Equality Observatory for Latin America and the Caribbean (GEO), as of 2018 the number of women murdered simply because they were women exceeded 3,800.

A second challenge lies in the need to step up efforts to further disaggregate data to be able to analyse, using an intersectional and intercultural approach, the policies, programs and actions aimed at reducing gender inequalities. It is especially important to learn about and address the situation of rural women, indigenous women, Afro-descendant women, migrant women, adolescent girls and young women, among others, and the set of barriers they must overcome to achieve autonomy.

For example, according to the GEO, in 2017 for every 100 men that lived in poor households in the region, there were 113 women in the same situation. Similarly, women in rural areas not only spend more time than men on unpaid work, but their participation in this kind of work is also greater than that of men and women in urban areas. Meanwhile, young Afro-descendant women between 18 and 24 years of age have low attendance rates in the higher education system in six countries of the region (Brazil, Colombia, Costa Rica, Ecuador, Uruguay and Venezuela). And in Argentina, Brazil, Ecuador, Panama and Uruguay, Afro-descendant women are the most affected by unemployment.

The third challenge lies in the fact that governments recognize that gender inequalities manifest themselves on an international, regional, national and subnational levels, and a renewed vision of public policy is needed to be able to address them in a comprehensive and coordinated way. In some cases, mechanisms for women’s advancement have intensified their work to extend the scope of policies for gender equality and women’s rights to subnational and local spaces. But the report emphasizes that it is necessary to keep reinforcing the territorial anchoring of these policies to increase their coverage, relevance and effectiveness in order to meet the many needs and demands of women and girls.

According to the document, since 2016, at least eight of the region’s countries have developed equality plans that incorporate the approaches, pillars and measures set forth in the Montevideo Strategy. At the same time, at least four countries have set 2030 as their deadline, aligning the time frame of gender equality policies with that of the 2030 Agenda for Sustainable Development. Also, many countries in recent years promoted the creation of gender entities in distinct ministries and at different levels of public administration, along with the establishment or strengthening of coordination mechanisms for gender equality policies.

A fourth challenge has been the need to increase the budgets allotted to gender equality policies. The report flags a low budget allocation for equality policies in different countries. This leads to the State having a limited capacity to address the human rights of women and girls. In addition, in the current scenario of economic contraction, it is essential that women (especially women in situations of poverty) not be harmed; on the contrary, countercyclical policies must be implemented in key sectors so they can achieve autonomy.

It is also necessary to continue creating favorable conditions for civil society, in particular women’s and feminist organizations and movements, to participate effectively in the monitoring of public policies.

The analysis of the progress made in the last three years as the Montevideo Strategy was implemented makes it clear that efforts must be redoubled to overcome the structural constraints of inequality and to achieve the Sustainable Development Goals (SDGs) by 2030. Contemplating the 10 pillars for implementation that the Strategy sets forth in an articulated way is key for public policies to have a deep, long-term impact on the achievement of women’s autonomy and gender equality. For that to occur, far-reaching transformations must be undertaken in the way the State is organized and managed, the document emphasizes.

Members of the media are invited to cover this Regional Conference, being held at ECLAC’s headquarters (Av. Dag Hammarskjöld 3477, Vitacura, Santiago, Chile). Journalists must have their media credentials or identity documents with them to gain access to the building, and they must get accredited ahead of time using this form.

The event is being transmitted live via ECLAC’s website www.cepal.org. ess coverage of the conference should be addressed to Guido Camú, Chief of ECLAC’s Public Information Unit.