Home » Press centre » Women’s Affairs Ministers from Latin America Participated in Virtual Meetings in Preparation for the Regional Conference that Will Take Place in November in Chile
Available in: EnglishEspañol

On June 26 and 27, authorities analyzed the progress made on the position document that ECLAC will present at the gathering, and shared national priorities regarding policies for women’s autonomy and gender equality.
27 June 2019 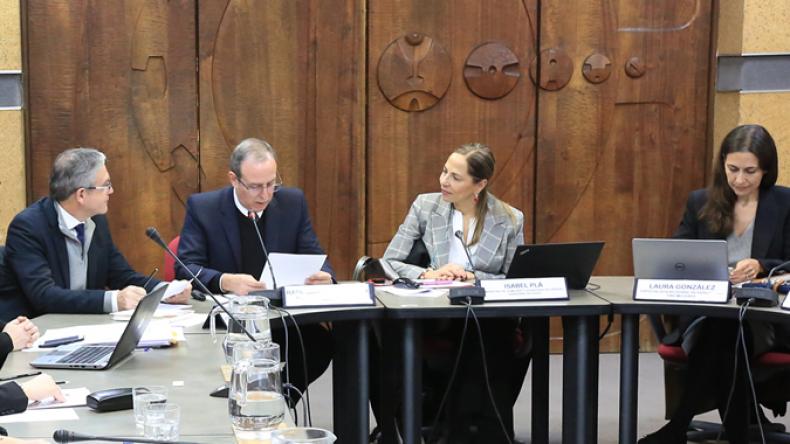 The two virtual meetings were organized at ECLAC's headquarters in Santiago, Chile.

Ministers for Women’s Affairs and senior authorities from mechanisms for the advancement of women in Latin America participated on June 26 and 27 in two virtual meetings in preparation for the XIV Regional Conference on Women in Latin America and the Caribbean (a subsidiary body of ECLAC), which will take place on November 4-8, 2019 in Santiago, Chile.

On Wednesday, June 26, the subregional preparatory meeting with Central American countries, Mexico and Spanish-speaking Caribbean countries was held. This gathering, co-organized by ECLAC and UN Women, was inaugurated by Isabel Plá, Chile’s Minister of Women and Gender Equity, and Raúl García-Buchaca, Deputy Executive Secretary for Management and Program Analysis of the Economic Commission for Latin America and the Caribbean (ECLAC) – both of whom were present at the Commission’s headquarters in the Chilean capital.

Other participants in the opening session, who spoke via videoconference, included Mariella Mazzotti, Director of the National Women’s Institute (INMUJERES) of Uruguay, in her role as president of the Presiding Officers of the Regional Conference, and María Noel Vaeza, Regional Director for the Americas and the Caribbean of the United Nations Entity for Gender Equality and the Empowerment of Women (UN Women).

After welcoming the authorities on behalf of ECLAC’s Executive Secretary Alicia Bárcena, Raul García-Buchaca indicated that the current international context – marked by trade tensions between major powers, the slow recovery of growth in the region’s economies, the deterioration in the quality of employment and an increase in the poverty rate – hampers efforts to overcome the long-term challenges that the region faces in terms of women’s autonomy and gender equality.

These challenges include, he said, the gender gaps existing in labor markets, the overburdening of women with unpaid work, their limited access to credit and to productive assets, and the lack of their own income. “At the same time, the acceleration of technological change and the advent of the Fourth Industrial Revolution pose new questions about their disruptive effects in society and especially about gender equality,” ECLAC’s senior representative stated.

In addition to conveying President Sebastián Piñera’s greetings, Minister Isabel Plá reiterated the Chilean government’s invitation to participate in the XIV Regional Conference on Women that will take place in November in Santiago, to “exchange experiences, share the progress made in each of the countries, and begin to map out our next navigational chart for the cause of gender equity in Latin America and the Caribbean.”

The XIV Regional Conference on Women will be held before two major international events also scheduled to take place in Chile: the COP25 on climate change and the APEC Summit. Plá highlighted that this has given cause for including issues such as climate change, women’s access to the digital world, and migratory movements in the debates.

Via videoconference, Mariella Mazzotti underscored the relevance of the theme chosen for the conference, which is “women’s autonomy in changing economic scenarios,” given the economic difficulties affecting the region’s countries and their impact on people’s living conditions and on the possibilities for achieving women’s autonomy and gender equality. The strength of the Regional Conference on Women, she said, lies in the consensuses and agreements that countries have been able to reach over time, respecting national differences, such as the Montevideo Strategy for Implementation of the Regional Gender Agenda within the Sustainable Development Framework by 2030 (approved in 2016). Mazzotti also called for averting rollbacks and for recognizing the historic contributions of feminist and women’s movements in the region.

María Noel Vaeza of UN Women indicated, also virtually, that “the Regional Conference on Women is a great opportunity to, once again, provide the region with solid instruments for framing countries’ public policies.” Furthermore, she stated that the Conference represents a key space for continuing to advance the women’s rights agenda and for nourishing the Beijing+25 process at a global level based on the region’s challenges and priorities.

In addition to the ministers from Chile and Uruguay, other participants in the meeting included representatives of Argentina, Costa Rica, Cuba, the Dominican Republic, El Salvador, Guatemala, Honduras, Mexico, Nicaragua, Panama and Puerto Rico.

On Thursday, June 27, meanwhile, the subregional preparatory meeting with South American countries took place. The opening remarks were made by Mario Castillo, Senior Economic Affairs Officer in ECLAC’s Division for Gender Affairs, while the ministers Plá and Mazzotti, as well as María Noel Vaeza, participated virtually.

In his remarks, Mario Castillo stressed the importance of this series of gatherings prior to the Conference for enabling more in-depth progress to be made on subregional and national emphases regarding the distinct dimensions of gender inequality.

In addition to Chile and Uruguay, the countries of Bolivia, Brazil, Colombia, Ecuador, Paraguay, Peru and Venezuela were represented in this second virtual meeting.