Achieving Gender Equality and the Care Society Requires Transforming Data into Information, Information into Knowledge, and Knowledge into Political Decisions

New document by ECLAC was presented today in the framework of the Fifteenth Regional Conference on Women in Latin America and the Caribbean, which is being held through Friday, November 11 in Buenos Aires, Argentina.
10 de November de 2022 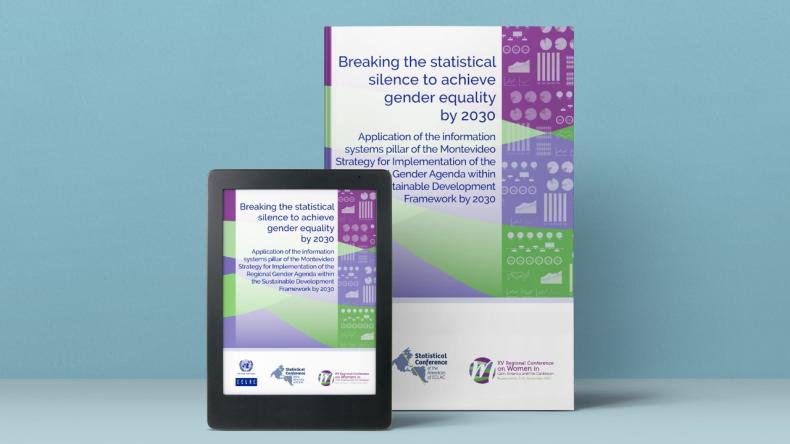 To achieve gender equality and the care society while leaving no one behind, we need to count what is not counted, transforming data into information, information into knowledge and knowledge into political decisions, according to a new document by the Economic Commission for Latin America and the Caribbean (ECLAC) presented in the framework of the Fifteenth Regional Conference on Women in Latin America and the Caribbean, which is being held through Friday, November 11 in Buenos Aires, Argentina.

The report Breaking the statistical silence to achieve gender equality by 2030, resulting from collaboration between the Regional Conference on Women in Latin America and the Caribbean and the Statistical Conference of the Americas of ECLAC, presents the current state of statistical production with a gender perspective in the region, the key factors for making progress in this area along with pending challenges.

The document was presented by Ana Güezmes, Director of the Division for Gender Affairs of ECLAC, and commented upon by Marco Lavagna, Director of the National Institute of Statistics and Censuses (INDEC) of Argentina – the country serving as Chair of the Statistical Conference of the Americas – and Nadine Gasman, President of the National Women’s Institute (INMUJERES) of Mexico, on a panel that was moderated by Clemencia Carabalí, Presidential Adviser for Women’s Equity of Colombia.

“The information generated in Latin America and the Caribbean made it possible to break the statistical silence and shed light on the unequal distribution of power, resources, work, time and wealth that underpins the unsustainability of the dominant style of development. In addition, the production of statistics with gender perspective has been essential to monitoring international commitments, especially the Sustainable Development Goals (SDGs), in a cross-cutting manner,” the report indicates.

The document reviews data on the four structural constraints that must be confronted in order to achieve gender equality by 2030, as established in the Montevideo Strategy: (i) socioeconomic inequality and the persistence of poverty in the framework of exclusionary growth; (ii) the sexual division of labor and unfair social organization of care; (iii) the concentration of power and hierarchical relations in the public sphere; and (iv) discriminatory, violent and patriarchal cultural patterns and the predominance of a culture of privilege.

In that regard, it specifies that the data produced by countries confirms a greater concentration of income among men in the highest quintiles, while only 35% of individual labor income is in the hands of women. In addition, gender gaps are exacerbated in households in the poorest quintiles. This reveals the challenges that still exist for reducing socioeconomic inequalities in the region’s countries and achieving SDG 10.

“Gender statistics are a powerful tool that illustrate the scale and intensity of the various forms of gender inequality in the labor market. The sexual division of labor persists in the region and is the main barrier to the increased participation of women in the labor market. The region had achieved the milestone of a 50% rate of labor participation among women, but in the first year after the arrival of the coronavirus disease (COVID-19) pandemic, this situation had been set back by the equivalent of 18 years, and revealed that, prior to the pandemic, women’s work functioned as an adjustment variable,” the document states.

It adds that, even with recovery efforts, currently, 1 out of every 2 women does not participate in the labor market, while in the case of men this figure falls to 1 out of every 4.

The report reveals that the gender perspective, along with intersectional analysis, has made it possible to understand and address the ways in which gender inequality is strengthened by other forms of discrimination in different areas of life, such as race or ethnicity, age, functional capacities, sexuality and gender identity, and territory. For instance, upon analyzing the labor market information by life cycle, it has been shown that young women face greater obstacles to labor insertion than men and women in other age groups.

It emphasizes that thanks to gender statistics, it has been possible to identify the underlying causes that influence gender inequalities among young men and women in the labor market. Some 37.8% of young women between 15 and 24 years of age and 22.5% of men in the same age bracket are neither studying nor in paid employment. However, while for women the most important reason for having no links to the main pillars of social inclusion – the labor market and the education system – is related to the need to assume caregiving responsibilities (51.1%), for men the main reason is unemployment (44.8%).

“This document is a milestone, because it’s the first we have done in the framework of two subsidiary bodies of ECLAC: the Regional Conference on Women in Latin America and the Caribbean and the Statistical Conference of the Americas of ECLAC,” Ana Güezmes noted during her presentation.

The document analyzes the regional architecture that supports the production of gender statistics and their comparability, as well as the mainstreaming of the gender perspective in the region.

It also examines the partnerships between data producers and data users and highlights the link between national statistical offices and mechanisms for women’s advancement, which has strengthened the dissemination of gender statistics.

Furthermore, it points up the progress made on the production of statistics on gender-based violence and on gender more generally.

The report includes a chapter addressing what should be measured in order to move towards a care society. In that regard, it underlines that demographic data constitutes the main tool for assessing demand for care and is the starting point for projecting potential demand in the future.

However, it notes that this information must be complemented by specific studies on social perceptions of the ideals of care in the population, the features of each country’s social welfare systems and women’s participation in the labor market, among other dimensions that affect the way in which societies organize and distribute care responsibilities.

Document: Breaking the statistical silence to achieve gender equality by 2030 XV Regional Conference on Women in Latin America and the Caribbean