Home » Press centre » Latin America and the Caribbean Needs to Move Towards a Care Society for a Sustainable Recovery with Gender Equality
Available in: EnglishEspañol

Argentina’s President, Alberto Fernández, led today the opening ceremony of the XV Regional Conference on Women in Latin America and the Caribbean, which will be held through Friday in Buenos Aires.
8 de November de 2022 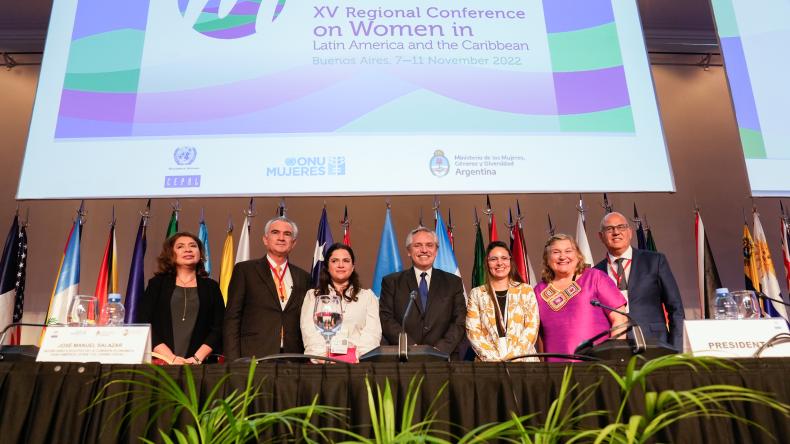 With a call to move towards a care society in order to achieve a sustainable recovery with gender equality in Latin American and Caribbean countries, the XV Regional Conference on Women in Latin America and the Caribbean was inaugurated today in Buenos Aires with the participation of Argentina’s President, Alberto Fernández.

The gathering, organized by the Economic Commission for Latin America and the Caribbean (ECLAC) in coordination with the United Nations Entity for Gender Equality and the Empowerment of Women (UN Women), is bringing together representatives of government, United Nations and intergovernmental organizations, academia and civil society – in particular, women’s and feminist movements – through Friday. This is the United Nations’ main regional, intergovernmental forum on women’s rights and gender equality, which celebrates its 45th anniversary this year.

“Feminism has transformed everything in recent years,” President Alberto Fernández emphasized at the start of his speech, adding that “the only thing this government has done is to join the demands for equality.” The leader commented that “the logic of equality is simply the logic of giving happiness,” and he pointed up some of his administration’s achievements, such as the creation of the Ministry for Women, Gender and Diversity, the expansion of sexual and reproductive rights, and the implementation of policies aimed at the LGBTI+ population, among others.

“Have we achieved everything that we wanted to? No, definitely not,” he said, recognizing challenges in relation to the wage gap, labor conditions for domestic workers, and rights for people who carry out unpaid care work. “It is necessary to understand that this is the end of an era, some call it patriarchy, others sexism. The only thing I know is that the time for inequality between men and women has ended. And although much progress has been made along this path, there is still a great deal more to tread and we are still very far from achieving the goals that we’ve set for ourselves,” President Fernández concluded.

“We have the responsibility, through this Regional Conference on Women, to change the narrative and transform the current development model. The proposal is to move towards a care society as a horizon for sustainable recovery with gender equality,” José Manuel Salazar-Xirinachs, ECLAC’s Executive Secretary, stated in his remarks, stressing that “the evidence shows us that achieving gender equality, women’s autonomy and the right to care is a central part of the solution to the cascading crises, an essential factor for the region’s economic recovery and for building the equitable and sustainable development model that we all aspire to and want.”

Also speaking at the inauguration were Gabriel Boric, President of Chile, in its capacity as the country  serving as outgoing Chair of the Regional Conference (via video); Ayelén Mazzina, Minister for Women, Gender and Diversity of Argentina; Antonia Orellana, Minister of Women’s Affairs and Gender Equity of Chile; María-Noel Vaeza, Regional Director for the Americas and the Caribbean of UN Women; and Claudia Mojica, Resident Coordinator of the United Nations System in Argentina (who read a message from the United Nations Secretary-General, António Guterres).

In her remarks, Ayelén Mazzina, Argentina’s Minister for Women, Gender and Diversity, indicated that “as a country we propose taking advantage of this forum to move towards a care society, while we also seek to create a true space for gathering, to strengthen commitments that would deepen what has been attained in these 45 years of history of the Regional Conference and the Regional Gender Agenda. We propose as a priority goal driving a paradigm shift that would prioritize the sustainability of life and would advance a new development model in which women and LGBTI+ persons are positioned as central actors.”

“We are handing over the chair of the Conference with concrete advances on the regional gender agenda, particularly in terms of gender mainstreaming at all levels of the State. Today we come to recognize this forum’s 45 years in existence with the conviction of moving forward and not backward, as well as to highlight the importance of strengthening and designing comprehensive care systems that would consider the responsibility of the State, communities, families, the private sector – and not just women,” stated Antonia Orellana, Chile’s Minister of Women’s Affairs and Gender Equity.

“Care systems are a tool for ensuring women’s economic empowerment. This is not just about numbers, econometrics and statistics: it’s about constructing a new development model, a new way of building a society that would put women at the center. It’s about asserting that a right to care exists,” stressed María-Noel Vaeza, UN Women’s Regional Director for the Americas and the Caribbean.

The United Nations Secretary-General, António Guterres, via a message read by Claudia Mojica, UN Resident Coordinator in Argentina, noted that the Regional Conference on Women “offers countries across the region a unique platform to share experiences and make commitments that advance national care systems and contribute to a transformative recovery that benefits all people.”

The theme of the meeting in Argentina “reminds us of the critical need to invest in the care economy, and address the care responsibilities that too often fall disproportionately on the shoulders of women and girls,” Guterres said.

Via video message, Gabriel Boric, the President of Chile, also highlighted the role of the Regional Conference on Women, “which has yielded so much for the struggles of women in Latin America and the world.” “Today, the challenges lie, for example, in the creation, in our country, of a national care system and in the problem of care in Latin America and the world, which has historically fallen on women, because of the sexist culture that we come from. We are determined to make progress on increasing its visibility, on its valorization and also its socialization,” the president affirmed, expressing the importance of extending networks in the region to move in that direction.

At the meeting’s opening session, participants posed the need to move towards a care society in which people are cared for, including caregivers, and which takes into account care between people as well as self-care, along with caring for the planet. This necessitates, among other things, promoting social and fiscal compacts to implement comprehensive social protection systems, offer quality care services, and ensure the financial sustainability of care policies

The programme of the XV Regional Conference on Women, taking place in Argentina, includes the launch of several documents with policy recommendations, a high-level debate on the care society, thematic panels on the financing of care and caring for the planet, and a roundtable on co-responsibility for care, in addition to 30 side events, the Feminist Forum and the Parliamentary Forum, among other activities. 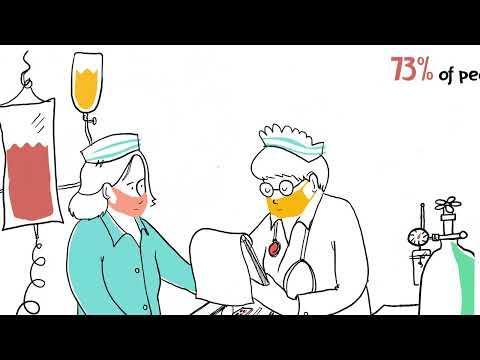